How to Calculate The Profit of Mining Bitcoin BTC

So you’ve got a system that you want to try mining some Bitcoins (BTC). The first question you’re going to as is “Will it make any money?”.

That’s a great first question and one that’s pretty easy to answer. All you need is two pieces of information and you can get a quick (rough) answer. This information is:

Once you have that information you can use the excellent mining calculator at Cryptcompare to do the math using the current market values to give you an answer.

Benchmark the speed of your rig

Head over to my Benchmark Your Linux Bitcoin or LiteCoin Mining Rig With BFGMiner article to get some benchmark numbers.

You can get a figure for either SHA256 or scrypt hashes. The default hash for BFGMiner is SHA256 which is the one used by Bitcoin.

Next, let’s work out how much electricity your system uses to generate those hashes.

How much electricity are you using?

There are two ways to measure how much electricity your system is using. You can:

Next, fire up the benchmark tool to load up the GPU and all the CPU cores. When that’s running start powertop:

It uses 42.1 W while the BFGMiner benchmark was running.

Now, you’ve got the power use and the hash rate you can work out your profit.

Head over to https://www.cryptocompare.com/mining/calculator/. Fill in the boxes as follows: 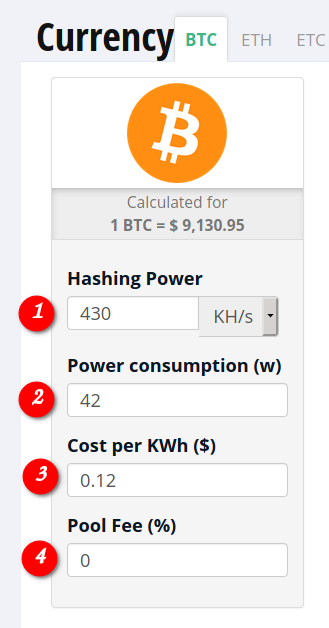 The calculator will now tell you much profit you can expect per day.